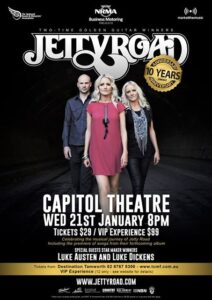 The 2015 Tamworth Country Music Festival marks 10 years for the band Jetty Road and a special show at the Capitol Theatre has been planned in partnership with NRMA Business Motoring.  On Wednesday January 21st, 2015, twins sisters Paula and Lee Bowman and Julian Sammut aka Jetty Road will be joined by special guests Star Maker winners Luke Austen and Luke Dickens.

The show will celebrate the musical journey of the Melbourne-based band and will include the premiere of songs from their forthcoming album, “Hearts On Fire” due for release on April 17th, 2015. Jetty Road recently returned to Canada to record their fifth album, with Paul Shatto who also produced their last album, “Far Away Places”.

“This is going to be an exciting and emotional show for us, and we’re thrilled that NRMA Business Motoring has come on board as the major sponsor to help us celebrate 10 years of Jetty Road. We started out busking on Peel St and now we’re about to release album number five! It has been an amazing journey and we can’t wait to reveal some of the new songs at our Tamworth show.” Paula Bowman, Band Member – Jetty Road.