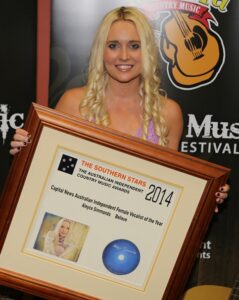 Aleyce is named ‘Female Vocalist Of The Year’ at The Southern Stars – Australian Independent Country Music Awards during the Mildura Country Music Festival.

Life is non-stop for Aleyce Simmonds and doesn’t show any signs of slowing down any time soon. August saw her perform three shows at the Gympie Music Muster before jetting off to the UK to headline the Yeehaw Country Music Festival and embark on her first UK tour – which included shows in London, Essex and Gloucester. Returning home she re-packed her bags for the Mildura Country Music Festival and 16 live shows. The festival is capped off with The Southern Stars – The Australian Independent Country Music Awards.

Aleyce was nominated in three categories – Album Of The Year for her 2013 release “Believe”, Single Of The Year for 2nd single, ‘Stronger’ and Female Vocalist Of The Year (“Believe”) and was thrilled to take out the latter category.

“I was honoured to be nominated for three awards, so to take out female vocalist was incredible. “Believe” is a collection of songs that I wrote and co-wrote from the heart so it means the world to have that acknowledged”, Aleyce said following the awards ceremony on Saturday October 4th.

Later this month, Aleyce will head back overseas, this time to Norway for a six-date tour with UK singer-songwriters Jack Henderson and Sam Grimley. Likened to Tom Waits, Bob Dylan and Elvis Costello – Jack and Sam will then join Aleyce in Australia to tour major cities in January and February 2015.

Aleyce and her band will perform at the 2015 Tamworth Country Music Festival. Tickets are on sale now – Capitol Theatre on Friday 23rd Jan at 7pm – BUY TIX HERE.

Aleyce’s current single is ‘My Life Drives Me To Drink’ – if any media would like a copy, please email: kris@kriskatpublicity.com.au