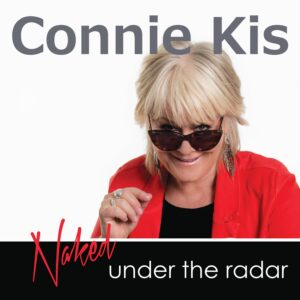 “Naked Under The Radar” – new album from Connie Kis Andersen is out now!

Connie Kis officially releases her 5th album “Naked Under The Radar” through WJO today Friday November 7th. The latest release features 12 tracks all of which were written by Connie Kis who also plays acoustic guitar on ten of them. The album was recorded, mixed and mastered at Mastermind, Nashville TN by Doug Wayne (Holmquist).

The tracks would be familiar to some of her fans and that’s because Connie chose to re-work some personal gems from earlier albums that had slipped ‘under the radar’ the first time around and the tracks have now been re-recorded acoustically.

The album’s first radio single, ‘On The Other Side Of Midnight’ has already grabbed the attention of radio presenters and is steadily gaining momentum with its up tempo, bare bones, country roots story of love possibilities after a fun night out at the local bar. This week the single came in at #4 on the Country Tracks Top 40.

Since the release of her previous album, Connie Kis has dealt with and survived treatment for cancer.  “Releasing this album has great significance to me,” says Connie Kis. “It symbolizes new life and opportunities on so many levels.  New life for me personally and new life for my songs.”

Connie’s career highlights include being named Western Australia’s Best Country Female Artist three times, winning the Best Independent Country Music Album for Western Australia twice, and receiving a TIARA for Female Vocalist in 2012 along with multiple awards for song-writing. She has already enjoyed chart success in Australia with her self-penned songs.

“Naked Under The Radar” is out now through WJO