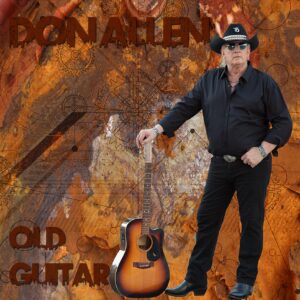 ‘Old Guitar’ the new radio single from Don Allen is the first to be released from his fourth album, “Only Time Will Tell”. The track was written by TSAI (Tennessee Songwriters Association International) award-winning writer James Breedwell and produced by Billy Anderson (Pam Tillis, Johnny Paycheck, Kevin Welch) of Breedens Studio Tennessee.

“Only Time Will Tell” features 12 original tracks including two written by Don and was released in the USA on CMG Records – CEO Steven B Riley has many years industry experience including as a musician playing for the likes of Waylon Jennings, Willie Nelson and Merle Haggard.

Originally from New Zealand Don has been singing country music since he was a young boy. He has worked all over Australia and New Zealand appearing on several television shows including ‘That’s Country’ (NZ) and ‘Ron Smeck’s Easy Livin’ Country’ (USA) plus in Jesus Christ Superstar (NZ) in the role of Judas. Don has been the recipient of the Golden Clef Award (NZ), Male Vocal – Gore (NZ) and Male Vocalist Of The Year – Queensland Country Music Awards.

Don’s previous albums “Let It Be Me”, “For The Life Of Me” and “One For The Road” also contain many tracks from Don’s own pen as well as cover versions of unforgettable country classics such as ‘Ring Of Fire’, ‘Folsom Prison Blues’ and ‘He Stopped Loving Her Today’.

Don’s music is available on iTunes and http://www.donallen.com.au/