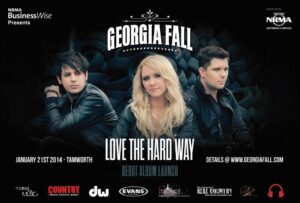 “Love The Hard Way” the debut album from Sydney based trio Georgia Fall, Mellissa Baker (vocals/guitar), Paul Bain (drums) and James Bernauer (vocals/guitar) has been two years in the making. The album was produced by Golden Guitar nominee Sean Rudd and also features songs co-written by ARIA nominated artist Lyn Bowtell. The album title is a reference to a song lyric and sums up the overall tone of the album, being that love can be a complex part of life.

Contrary to popular belief, no one in the band is named Georgia; the trio simply thought it had a great ring to it. Lead vocalist Mellissa, a CMAA Academy Of Country Music graduate grew up in Charters Towers, QLD and was a regular at the state’s country music festivals, whilst drummer Paul grew up in Brisbane and is nationally endorsed by DW Drums and James, one of Sydney’s hottest guitarists, has spent his life studying music and is a graduate of the UNE with a Bachelor of Pop Music and Performance. The trio was formed in Sydney, where they now all reside.

“Love The Hard Way” will be officially launched during the Tamworth Country Music Festival on Tuesday January 21st, 11.00am at the SSS BBQ Barn. As a testament to Georgia Fall’s commercial appeal, NRMA BusinessWise has come on board as a major sponsor for the event. Two ticket packages are available:  Standard ticket: $35 – Includes ticket with finger food and drink on arrival, album, t-shirt, keyring and a sticker (over $70 retail value), VIP ticket (only 10 available): $100 – Includes the standard package PLUS an exclusive VIP night out with Georgia Fall during the festival and a couple of drinks on the band to thank the VIP fans. Album launch ticket only available for just $20.

For further information including an interview with Georgia Fall, contact: