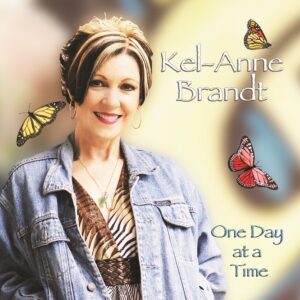 ‘Grandma’ the new radio single from Kel-Anne Brandt, is the 1st single from her 3rd EP “One Day At A Time”

Believe it or not, ‘Grandma’ the latest radio single from Kel-Anne Brandt, was inspired by first-hand experience. In the past three years, the NSW Central Coast based artist has become a ‘grandma’ not once but four times! Whilst some would recoil from this, Kel-Anne has relished her new role and even put pen to paper about it, co-writing this track with Roger Corbett of ‘The Bushwackers’ fame.

‘Grandma’ is the first radio single from Kel-Anne’s third EP, “One Day At A Time” (she has also released two full albums). The album was produced/engineered/mixed by Matt Fell (Troy Cassar-Daley, Graeme Connors, McAlister Kemp) and mastered by Michael Carpenter (Adam Brand, The Harmonators, Jonah’s Road) at Sydney’s Love HZ studios and released in September 2013.

As well as her singing career Kel-Anne has also appeared on TV both in commercials and dramas including Channel 7’s ‘All Saints’ plus she was a regular on Bert Newtown’s ‘Good Morning Australia’ on Network Ten. Born in Cessnock, NSW, Kel-Anne and her family moved to Orange, when she was just three years old and this is when she made her stage debut. Over the years she’s had many radio hits both in Australia and the UK.

The turning point for Kel-Anne was in 1997 when she was faced with a life threatening condition – doctors found a tumour on her thyroid and confirmed it to be malignant. By some miracle, during the operation doctors found the tumour was in fact benign. Recovery was tough and after a six week wait Kel-Anne was grateful to be able to sing again.

With the help of ‘The Judds – Greatest Hits’ CD, she trained her voice back with vocal exercises then recorded a promo album, left her day job, busked on Peel Street Tamworth the following year and the rest is history…  Kel-Anne believes, “what was supposed to be the end of my life became the beginning of my Country Music career”.

‘Grandma’ was digitally serviced to radio via CRS Publicity

**If you don’t have this track, please contact KrisKat Publicity**

For further information including an interview with Kel-Anne, please contact: