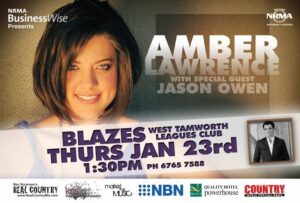 For the first time in history, NRMA BusinessWise will have a major presence at the largest music festival in the Southern Hemisphere, the 2014 Tamworth Country Music Festival. With NRMA’s proud heritage of supporting the NSW and ACT community for the past 96 years, the mutual will support some of Australia’s biggest Country Music stars at the 2014 event. One of these events will see multi-award winner, Golden Guitar finalist and CMC favourite Amber Lawrence bring her show to The West Tamworth League club. Joining Amber, to open the show is her current touring buddy and runner-up of the 2013 X-Factor TV series Jason Owen.

”It’s fantastic that an iconic Australian company is supporting Australian Country Music. We spend so much time as country singers driving the great open road of Australia so it’s great to have NRMA Motoring & Services’ support on and off stage!” – Amber Lawrence

This festival event will happen at 1.30pm on Thursday January 23rd at the West Tamworth League Club and is part of their ‘Islands In The Stream’ Tour, the title of their duet single released in April. The show will feature Jason and Amber performing their own hits with their touring band, as well as special duets. Tickets are on sale now: WTLC – Ticket Sales

For further information including an interview with Amber, contact: