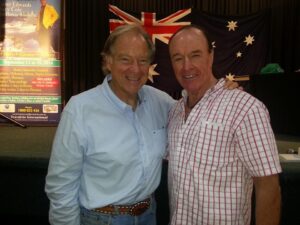 A chance meeting in March saw Rob E.G / Robie Porter guest star on the Carter Edwards Show which airs nationally on the 2SM 1269 Super Radio Network every Saturday and Sunday night. But this wasn’t your average interview – after a mammoth one and three quarter hours, the marathon interview is to be continued…this Saturday night, May 3rd from 8pm.

Live from Newcastle’s 2HD studios Robie will once again join Carter, who has recently been nominated for ‘Compere Of The Year’ in the 38th MO Awards. This time they are celebrating Porter’s return to the performing stage: ‘The Return Of Rob E.G.’, and the radio program is being billed as a ‘This Is Your Life’ type show. With guest stars including Gary Young & Wayne Duncan of Daddy Cool, Les Gock – leader of Hush, Steve Binder – U.S. Television legend, and up-and-coming Australian country star Ben Ransom, reminiscing will be high on the agenda for the star-studded show. Asked if he has ever done a program like this before, Carter said: “No one else has qualified!”

Originally finding fame as a singer and instrumentalist under the name ‘Rob E.G.’, Porter was Australia’s #1 selling recording artist in the mid-1960’s, Logie Award winner, and This Is Your Life TV honouree. His own 15 hit singles include the #1 Gold Hits ’55 Days At Peking’, ‘Jezebel’ and ‘Si Senor’.

Porter moved to the U.S. in 1966 and went on to be a successful singer, TV performer and movie actor there, at the same time becoming Australia’s all-time #1 hit record producer. Included in his 29 #1 Hits as a producer, songwriter and publisher in Australia, the U.S and around the world, are the iconic #1 Gold and Platinum hits ‘Eagle Rock’ (Daddy Cool), ‘All Out Of Love’ (Air Supply), ‘I Just Don’t Know What To Do With Myself’ (Marcia Hines), ‘Jessie’s Girl’ (Rick Springfield), ‘Boney Maronie’ (Hush) and ‘Dare To Be Different’ (Tommy Emmanuel).  Porter also recently produced ‘Somebody’s Baby’, the new single from Ben Ransom.

‘The Return Of Rob E.G.’ will find Robie Porter performing all of these above smash hits in his new show “Behind The #1 Hits”, being debuted at Dee Why RSL Club Show Room, Saturday 17th May.

For further information including an interview with Rob E.G./Robie Porter, please contact: