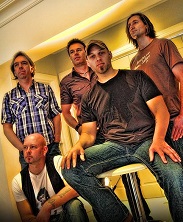 ‘Let’s Stay In’, the follow-up single to ‘Thrills ‘N’ Spills’ from The Brook Chivell Band is about the trials and tribulations of a modern relationship. Most couples can relate to finding the time in their busy schedules for some precious moments together.

The third single from the band that calls Melbourne home, was written by guitarist/lead vocalist Brook and guitarist/backing vocalist Anthony Emery and after two country rock singles, this proves the band isn’t afraid of showing their more sensitive side on the emotional ballad.

Working with Ross Wood of 171 Entertainment for the first time, the video clip was partly shot at a farmhouse in Victoria and also at band mate Paul Gales’ house. Take a look at the video clip on YouTube – CLICK HERE

“The guys have married their inherent rock sensibilities with Brook’s genuine ability to tell a story. The album succeeds in taking the listener on a journey both lyrically and melodically”

**IF YOU DON’T HAVE THIS SINGLE, PLEASE CONTACT KRISKAT PUBLICITY FOR A COPY**