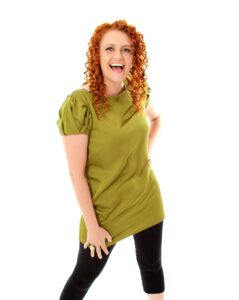 ‘You Aint Never’ the latest radio single from Toowoomba-based Victoria Edwards is the second to be lifted from her sophomore album “Authentic”. The track is a duet with fellow Queensland artist Paul Cowderoy and was penned by Victoria and her guitarist Micah Bacquie.

It’s a fun-take on a long-term love story – the words ‘you aint never NOT gonna get none of my love no more’ make perfect sense if you live in a trailer park with ten kids and a husband that promised the world… and you’re still waiting. The song was born when friend Andrew ‘Muddy’ Waters retold the tale of when he over-heard a young mum with a pack of kids growl similar words at her son. As soon as he delivered the story Victoria knew there was a song in it!

Shayne Cantly from Evolution Studios in Toowoomba, QLD was the brains behind the associated video clip and has produced clips for Jimmy Barnes, Gina Jeffries and Travis Collins. While Paul Cowderoy provided vocals on the track, Dane Anderson is the face in the clip planned for release in mid June. Dane, a local guitarist who Victoria works with, has also toured with Warren H Williams.

The clip is set in a dollhouse which Victoria created herself along with the green dress she and her doll body wears. After four hours of shooting plus approximately the same for some outside shots and with the help of a little magic, Victoria will be living her happy-ever-after soon enough.

“Authentic”, released in September 2012, is a truly international collaboration with the vocals recorded in Queensland and the music in Nashville. The eleven track release includes nine written or co-written by the 2013 Toyota Star Maker finalist along with tracks from Shay Watson and Joe Nash (Gretchen Wilson, Tanya Tucker) and a song penned by Jaclyn North (her songs have been placed ‘on hold’ by Lady Antebellum and Reba McEntire) and Steve Williams (Buddy Jewell & Blake Shelton).

The College Of Country Music graduate found her singing voice at an early age as she was going to church choir with her mum and insists that travelling and driving down highways is in her blood. And after hearing she was born in Canberra but has been to 13 different schools across Australia and New Zealand, there’s little room for doubt.

**IF YOU DON’T HAVE THIS SINGLE, PLEASE CONTACT KRISKAT PUBLICITY FOR A COPY**